Once upon a time I knew how to translate Marinni’s blog posts from Russian to English.  Alas, there were too many days between visits and now I am reduced to Babelfishing small phrases.  (If you know how to simplify the process, PLEASE leave a comment for me with instructions.)

She has a beautiful page – lots of photos of weird and fantastical things.  To get the full load of pictures, click on the link below the picture and it opens up the page with a plethora of photos.  I’ve provided the link to the one page I’ve enjoyed the most this week, but go to her homepage and discover your own preference of strangely bizarre gorgeousness.

Oh, all right, just one more for fun.  What could be more imaginative than portraits of animals?  Is it just me or does this mallard look like he’d be a great host at the Halloween party? 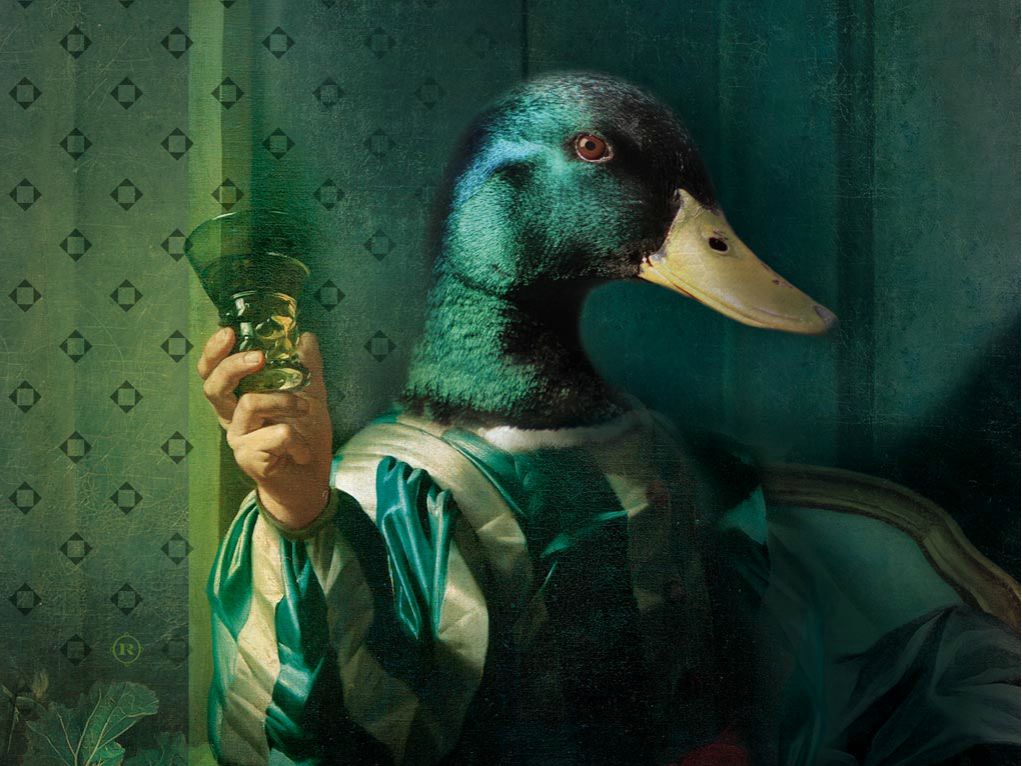 This is last week’s SNL opener.  Watch it to the end to see what we all agree on – unfortunately, it’s not satire of the Democratic party, it is all too sadly true.  Lemmings over the cliff, pulling the rest of us with them.

Benjamin Franklin is one of my favorite American success stories.  I picture him with a    twinkle in his eye and a salacious bounce in his step.  But for all of his “Hail Fellow Well Met”  bonhomie, he was actually a very wise man with an eye to improving the future.  Take the concept of his Junto group.  (Description taken from PBS website.)

“Ben Franklin was a gregarious person, who loved sitting down and having long conversations with friends and acquaintances. In 1727, Franklin organized a group of friends to provide a structured forum for discussion. The group, initially composed of twelve members, called itself the Junto.

The members of the Junto were drawn from diverse occupations and backgrounds, but they all shared a spirit of inquiry and a desire to improve themselves, their community, and to help others. Among the original members were printers, surveyors, a cabinetmaker, a cobbler, a clerk, and a merchant. Although most of the members were older than Franklin, he was clearly their leader.

Franklin describes the formation and purpose of the Junto in his autobiography:

I should have mentioned before, that, in the autumn of the preceding year, [1727] I had form’d most of my ingenious acquaintance into a club of mutual improvement, which we called the Junto; we met on Friday evenings. The rules that I drew up required that every member, in his turn, should produce one or more queries on any point of Morals, Politics, or Natural Philosophy, to be discuss’d by the company; and once in three months produce and read an essay of his own writing, on any subject he pleased. Our debates were to be under the direction of a president, and to be conducted in the sincere spirit of inquiry after truth, without fondness for dispute or desire of victory; and to prevent warmth, all expressions of positiveness in opinions, or direct contradiction, were after some time made contraband, and prohibited under small pecuniary penalties.

The Junto’s Friday evening meetings were organized around a series of questions that Ben devised, covering a range of intellectual, personal, business, and community topics. These questions were used as a springboard for discussion and community action. In fact, through the Junto, Franklin promoted such concepts as volunteer fire-fighting clubs, improved security (night watchmen), and a public hospital.”

Would Congress work better if they shared interests and ideas in a social setting rather than just committees?  I don’t think large cocktail parties count.  Maximum eight people, and they follow The Junto rules of Benjamin Franklin.  We say we send the politicians to Washington to work.  But wouldn’t it be better if, before they work, they discuss, share, grow mentally, learn and cooperate?  Where did we go so wrong?

I came back to the U.S. three years ago after a total of 16 years abroad.  One of the things I miss most – the quiet, yet sonorous cathedrals and chapels.  I would duck into every one I came across while walking through Vienna, Berlin, Munich and Prague.  Why don’t the churches in the U.S. ever feel holy without people inside?  The buildings sometimes are beautiful, but they don’t stir my soul.  Standing in the center of this Baptistry and looking at the ceiling would calm me and the meditation/mindfulness would be off the charts!  Note to self – next meditation, picture myself in this room with candles.  Om.

. . . And they get REALLY pissed off when a Democratic dilettante mocks them.  Uh, Mr. Drunk and Disorderly Guy, don’t throw stones at that patriotic American.  He will wipe the floor with you with one hand.

From a great comment by Jake over at Monsterhunters Blog.  Jake, if you are ever in the neighborhood, I would love to buy you a drink!

“Democratic civility: “If you believe things contrary to what I do, I will call you a bigot. Just letting you know.”

Democratic compromise: “Here’s my deal for you. I’ll tell you what I want, and you’ll give it to me.”

Democratic free speech: “The US strongly denounces this despicable video. They had no right to say those things.”

Democratic religious tolerance: “Suck it, Catholics – we’re the moral authority here, not you, so we’ll tell you what’s what on abortion.”

Democratic non-interference: “Israel has no right to defend its settlements or its people. Until they shape up and stop hassling those poor, defenseless Palestinians, I’m not even going to meet with them about Iran.”

Democratic economics: “That guy over there has more than you. He must have stolen it from you! Get him!”

Democratic military affairs: “Those Navy SEALs did an excellent job. Good thing I was there to make it all happen!”

Democratic foreign affairs: “My most-of-one-term as senator makes me far more qualified on foreign affairs than my opponent. Why, I organized entire neighborhoods! The most he’s ever organized was the Olympics, a state, and some multinational corporation!”

And finally, Democratic responsibility: “And my policies would have worked, if it hadn’t been for those meddling Republicans!”

Our Lady of Second Helpings

News You May Have Missed

News you need to know to stay informed

WISDOM STORIES TO LIVE BY

Life will go on as long as there is someone to sing, to dance, to tell stories and to listen — Oren Lyons

Beautiful photos of hiking and other outdoor adventures.

Over the Rhine and Into the Tiber

The pursuit of Catholic continuity in, under, and around the Archdiocese of Cincinnati

The Matt Walsh Blog
Aliens in This World

An ordinary Catholic and a science fiction fan.

"To create is to remember" ~V. Hugo

Diane, A Broad
Home of the JAG NCO

Throwin' Down the Law!

disciple of the tea leaf

newt, me, and tea